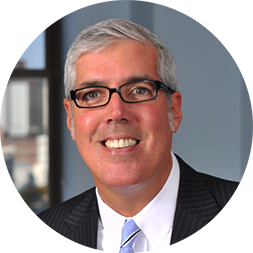 "While at BGSU, George was Treasurer of the Gamma Mu Chapter of Theta Chi Fraternity and member of the Varsity Soccer Team"
George Heath
Group President Sherwin-Williams

While at BGSU, George was Treasurer of the Gamma Mu Chapter of Theta Chi Fraternity and member of the Varsity Soccer Team. These financial and leadership experiences built the foundation for his career to come, and friendships that have lasted decades.

After receiving his BFA at Bowling Green and his MBA at Miami University,
George grew his family’s engineering firm by 1,900% and won five consecutive
Weatherhead 100 Awards as one of Northeast Ohio’s fastest growing
companies. George then helped grow a venture-funded software startup in
Boston and expand a division of PPG Industries in Pittsburgh before being
recruited back to Cleveland by Sherwin-Williams.

George now lectures at Clemson University, SUNY Oneonta, and Miami
University, where he also serves on the board of the Farmer School of Business.

George was recently awarded Alumni of the Year from the College of Arts
and Sciences at Bowling Green. George, his wife Julie (a Phi Mu at Bowling
Green), and their two sons reside in Chagrin Falls, Ohio.