"Nick co-founded the first BGSU Alumni Chapter, hired more BG graduates than just about anyone, and was one of the President’s Club’s first member"
Nick J. Mileti

The operative words in Nick Mileti’s career are social consciousness.  In the early 1960’s, attorney Mileti (JD, Ohio State, ’56) was among the first in the nation to recognize the significance of a new form of government financing for non-profit senior citizen independent living facilities.  Mr. Mileti represented numerous church and civic clubs as well as prestigious organizations, including (to name only a few), The Episcopal Diocese of the State of Massachusetts, The Connecticut Conference of the United Church of Christ, and The Ohio Federation of Business and Professional Women’s Clubs.  Nick’s common sense and creativity helped set the standards for the new program and resulted in his being asked to testify about it before the United States Senate. In 1968, Mr. Mileti purchased the 10,000 seat Cleveland Arena and the minor league Cleveland Barons hockey team.

Recognizing that Cleveland (as the eighth largest American city at the time) needed major league teams and facilities, Nick founded the Cleveland Cavaliers NBA basketball team in 1970, followed by founding the Cleveland Crusaders WHA hockey team and building the 22,000 seat Richfield Coliseum. He purchased the Cleveland Indians baseball team from Vernon Stouffer to keep them from moving to New Orleans, and acquired a 50,000 watt radio station from NBC to carry his team’s games.  Nick was also the co-founder of The Lakewood Hometown Band Concerts and The Cuyahoga Valley Scenic Railroad. Over the years, Nick has received innumerable national awards and recognition, but he values his alma mater’s extensive honors the most.

The MILETI ALUMNI CENTER is named for him, he has received an Honorary Doctorate from the University, and was awarded the Distinguished Alumnus Award and the Community Service Award.  He was inducted into Omicron Delta Kappa, was named one of the prominent 100 graduates of BGSU, and served on the University’s Board of Trustees.  Nick co-founded the first BGSU Alumni Chapter, hired more BG graduates than just about anyone, and was one of the President’s Club’s first members.  Since retiring, Nick Mileti has become an author and has had three books published.  Published: 2011 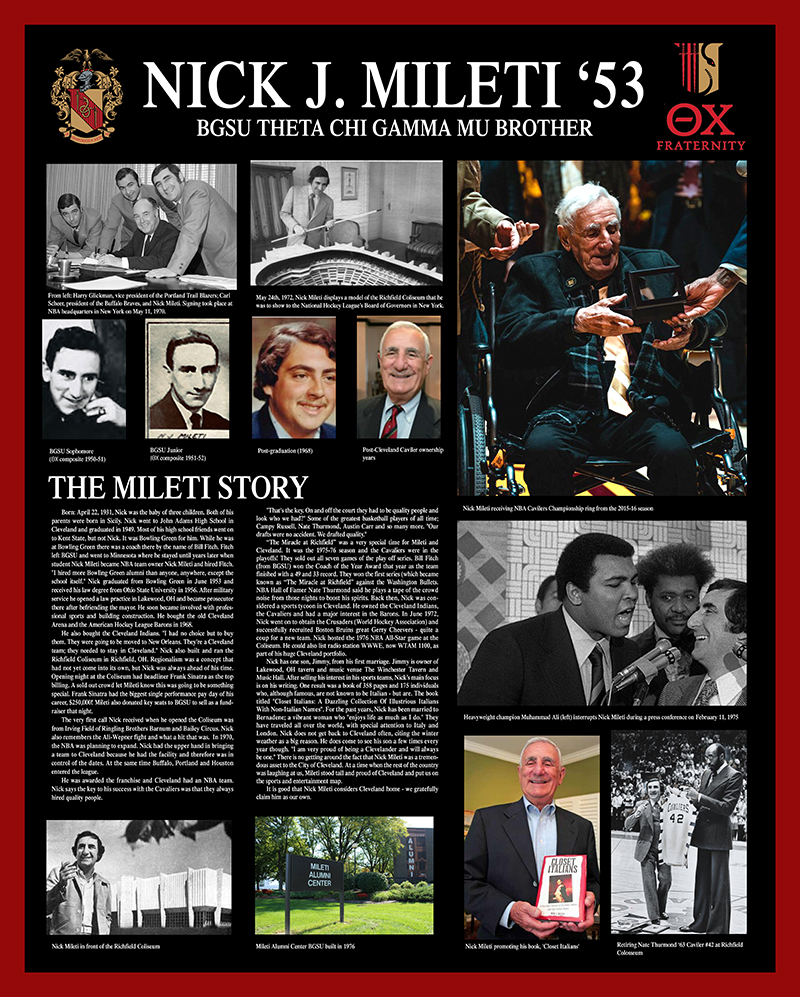