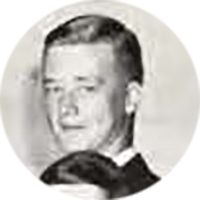 An eleven-year career with IBM in Northeast Ohio led to a rewarding career in the housing industry with building products manufacturers that supply products for residential and commercial construction.
‍
Served in senior management sales and marketing responsibilities with Moen Faucet (Cleveland, OH), Merillat Cabinetry (Adrian, MI) and Gerber Plumbing Products (Chicago, IL).  During this period, he served the industry at the national level as a trustee for 22 years for the National Association of Homebuilders (N.A.H.B.) which is based in Washington, D.C.  Following an extensive career in “corporate life”, he returned to a “people to people” career which has included 7 years in the luxury/performance automotive industry (Chicago, IL & Cleveland, OH) and the housing industry as a Realtor in Northern Ohio which he has been enjoying for the past 11 years.

Close involvement with BGSU began in 1982 when he accepted an invitation to participate in a College of Business Executive-In-Residence program, where he was asked to address a class on “the corporation” and his IBM experiences.  He remained a contributor in this program for 18 years.  This opened up a passion for assisting and mentoring students which continues to this day.  He was elected to the BGSU Alumni Association Board of Trustees in 1984.  From 1984 through 1989, served as treasurer, president and past president of that body.  These were productive years for this organization.  Was recognized with The Alumni Service Award in 1991 by the Alumni Association.

Since the early 1980’s, he has continued guest lecturing and speaking in the College of Business, where he would support classes by addressing “real world” situations that were being studied at certain times in the curriculum.  Special College of Business department programs, task forces and councils also receive his services.  This expansive student involvement resulted
in creating a support program, “Competitive Analysis & Your Career” which he uses as a basis for mentoring at both the classroom and individual levels.  He was appointed to the Dean’s College of Business Board of Advocates in 1992 (known today as the Dean’s College of Business Leadership Council).  Now in his 26th year on the Council, he was awarded Emeritus status in April
2017.

Service during his term on the Alumni Association Board provided the opportunity to present many types of recognitions and awards to top performing students.  There was always a common denominator in each award…GPA!  However, it was apparent that students were contributing more to their BGSU careers than just grades.  There was strong on-campus organization involvement that benefited students, the University and the Bowling Green, Ohio community.  Campus organizations were growing at a rapid rate in all colleges.

Campus leaders were blossoming.  Yet, there was no special recognition for student performance and leadership that developed from these very beneficial activities. Acting on his strong desire to inclusively recognize student participation, leadership and academic performance throughout the campus and with the support of the Alumni Association administrative team, the BGSU Outstanding Senior Award was created.

The initial recipient was recognized in 1990.  The award is designed around the fact that the BGSU Experience is, at the very least, 60% social and community based and 40% academic performance.  The award recognizes students who apply their academic learning to the “community” of BGSU and the surrounding areas while maintaining strong academic performance.  The award is presented in April of each year following an extensive nomination and evaluation process.  Nominees for the award come from the faculty and administration.  The 29th consecutive Outstanding Senior Award will be presented in April 2018.  It is one of the longest running awards in BGSU history…a fact in which he takes great pride.

Bill and his wife, Eileen, live in Avon Lake, Ohio. They have two daughters…Sherry, a BGSU Falcon and Alpha Phi (1990) and Susan, an Alpha Phi from the University of Akron along with four grandchildren.

Bill is looking forward to the opportunity to offer his experience in assisting and mentoring members of the new Gamma Mu colony of Theta Chi Fraternity at BGSU.